Is Re-piping your Whole House a Good Idea?

Like all things, plumbing pipes also undergo wear and tear and need repairs from time to time. These repairs counteract the effects of corrosion, rust, and decay but there comes a point when the pipes are unable to function properly. At this point, the risk of floods or severe water damages greatly increases and places homeowners at risk of thousands of dollars’ worth of repairs.

Re-piping services is an ideal option that prevents plumbing emergencies and reduces the possibility of financial disasters. However, the main question on most homeowners’ minds is whether to avail partial or complete re-piping services?

In this blog, we’ll discuss whether re-piping your whole house is a good idea.

Watch out for Signs of Danger

Homeowners residing in houses that are older than 60 years should get the plumbing system inspected on an annual basis. An easy way to determine the condition of your plumbing system is to inspect exposed pipes inside utility rooms, basements, and crawl spaces for signs of stains, pimples, flaking, discoloration, and dimpling.

Keep an eye out for leaks as well. While the occasional pipe leak is to be expected, frequent repair jobs are indicative of a whole-house repair job. An easy way to determine serious signs of corrosion and wear and tear is to fill the bathtub with water after you return home from a business trip or a vacation.

Since the water has been sitting inside the pipes for a long time, the appearance of yellow or brown color is a sign of decaying pipes and corrosion, as stated by the Water Quality Association.

The budget is the primary consideration for partial or whole-house re-piping. Costs can vary depending on the layout of your plumbing system. If most of the pipes are hidden behind wooden panels, plaster walls, or hard to reach places, a partial re-piping of exposed pipes is a viable option. Not only is it cheaper, but the entire process is completed in relatively less time.

Another option is to delay the re-piping project until a home remodeling. During this time, the recons 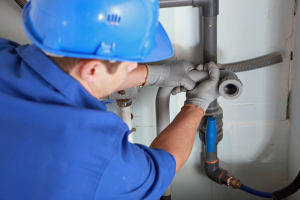 truction exposes otherwise hidden sections of the plumbing system and makes it easier to carry out a whole-house re-piping project. To be fair, we would recommend re-piping the whole house if your plumbers recommend it. That’s because the initial costs would be far less than repairing the damages stemming from a serious plumbing disaster that takes place down the line.

Finally, if your home still has lead or polybutylene pipes, you should have them replaced regardless of their condition. That’s because polybutylene pipes are extremely prone to damages and lead pipes pose a serious health hazard.

Both partial and whole-house re-piping projects can prove to be outside the budget of most homeowners. That’s why we at Pro Serve Plumbing offer affordable repipe services in Fort Worth, Texas that mitigates the risk of plumbing disasters!